Enobike on the Vestine hills 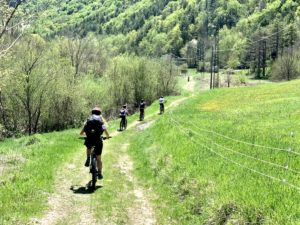 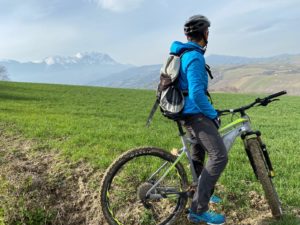 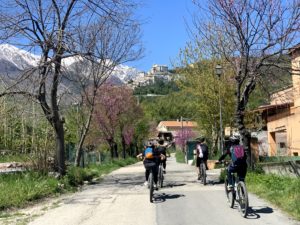 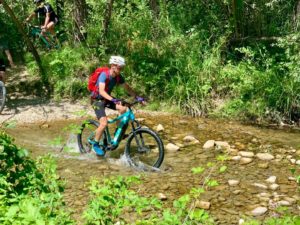 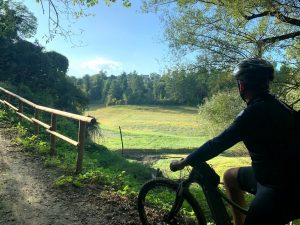 Discover Penne and Terre Vestine by mountain bike. Excursion on scenic routes, in an area rich in vineyards, with a final visit to the De Melis winery.

Penne is awarded the title of City of Art and received the Silver Medal for Civil Merit.

A town in the Abruzzo Adriatic, Penne stands on four hills: Colle Sacro with its 438 meters, Colle Romano, Colle Castello and Colle Cappuccio. Its coat of arms includes four silver towers representing the four hills on which the city was founded, a purple shield all surmounted by a royal crown with lily flowers.

The origins of the city of Penne are unknown and the history of Penne begins with the arrival of the Vestini people in the Abruzzo region, hence the name of Pinna Vestinorum.

The various archaeological discoveries document that Penne is a pre-Roman city, it is thought, in fact, that the origins of the name can be traced back to the Goddess Vesta. The first news of the city of Penne dates back to 326 BC. when Penne was allied with the Samnites in the wars against Rome with which the Pennese people, after a long period of resistance, allied themselves; the first testimonies of this alliance are offered by Tito Livio.

During the Lombard period Penne was freed by Charlemagne who granted it the “Provincia Pennese” given its significant territorial extension. Subsequently, many historical figures visited Penne, signing numerous concessions such as that of the abbey of S. Clemente in Casauria by the Emperor Ludwig II.

After the Lombard period Penne was occupied by the Normans who built the walls still visible today and who, as evidence of their passage, left the Norman Tower located next to the Porta di San Francesco.

Already in 1600 during his travels in Abruzzo, the friar Serafino Razzi wrote of Penne “as the city with very fertile surroundings that produces wheat, excellent wine, a great abundance of oil, melons and a great variety of fruit, with many woods, water by fountains and abundant rivers; healthy air, and good and simple inhabitants “.

In 1799 Penne became the Parthenopean Republic and, in 1814 it became famous for the revolt of the Carbonari by Clemente De Caesaris. In 1816 it was the main city of the district and remained so until 1837, the year of the insurrection against the Bourbons. The Mazzinian movements of 1849 and 1860 should also be remembered.

During the Middle Ages and the Renaissance, Penne was the home of many noble families who built villas and palaces still present today within its wonderful historic center. The most important of them is certainly the Palace of Margarita of Austria which also has a prestigious Romanesque courtyard inside and which currently houses the convent of the nuns of the Holy Family of Penne (S. Ciro). Also worth mentioning are the Palazzo Castiglione (17th-18th century) and the Palazzo De Sterlich-Aliprandi (18th century).

There are also numerous churches in the Pennese area: the Cathedral, whose construction began around the year 1000 and ended in the Gothic period and was later modified in the Renaissance and in the Baroque period; the 16th century Capuchin Church; the Romanesque Church of S. Agostino modified in the Baroque period; the Church of Colleromano (14th century); the 17th century Church of S. Giovanni Battista; the Church of the B.V. del Monte Carmelo from 1300, the Church of the Annunciation from 1773 and many other churches that are evidence of the ancient artistic, historical and cultural splendor of the city of Penne.

Nature and territory
To the historical and artistic heritage of the City of Penne is added the naturalistic one represented by an environment rich in flora and fauna typical of the area with a unique panorama for the variety of landscapes and alternation of colors in all seasons, dominated by the green of the hills scattered with olive groves, vineyards and wheat fields.

Penne is one of the most important centers of the Vestina Area located at the same distance between the mountains and the sea, in an excellent hilly position, a natural gateway to the Gran Sasso and Monti della Laga National Park through the “Lago di Quills”.

The Reserve, a protected area of ​​the park, extends for about 150 hectares in the municipal area of ​​the city of Penne. It is a set of various environments: you pass through different types of woods going up the green hills until you reach the cultivated areas characterized by olive trees and cereals. The area presents an alternation of man-made areas and wilderness areas. The lake is an artificial basin created by the narrowing of the Tavo river; since 1987 the Lago di Penne Nature Reserve has been one of the most important reserves of the Region which, over the years, has started wildlife conservation initiatives including the WWF Italy Otter Project, with the creation of a breeding and education center of the otter on the shores of Lake Penne

End of journey
Minimum number of participants: 5 persons
Price includes
•   Mountain Bike + helmet + pump + repair kit
•   Water
•   Wine tasting
•   Food tasting
Price not includes
•   Everything not mentioned in "The price includes"
Travel time
1 Days
Your guide
Self guided Tour
We provide you
•   Mountain Bike + helmet + pump + repair kit
We suggest to bring
•   Comfortable clothes and shoes for biking
Book now at € 45 per head
We use cookies to enhance your browsing experience and to gather informations on the use of this app.
Continuing navigation you accept the use of cookies, otherwise you should leave it.
Okay